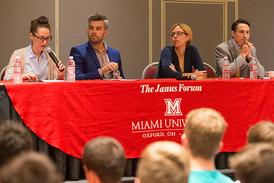 My research explores public and political resistance to judicial authority in the United States. This methodologically pluralist work makes linkages across subfield boundaries, speaking to scholars that study legitimacy, race and politics, inter-institutional conflict, and media and politics. In addition to the publications below, some of my other ongoing work includes NSF-funded research, joint with Justin Wedeking, on support for the Supreme Court and the rule of law in light of dramatic changes in the media landscape.

The University of Michigan Press

​Summary: When the U.S. Supreme Court announces a decision, reporters simplify and dramatize the complex legal issues by highlighting dissenting opinions and thus emphasizing conflict among the justices themselves. This often sensationalistic coverage fosters public controversy over specific rulings despite polls that show that Americans strongly believe in the Court’s legitimacy as an institution. The Limits of Legitimacy illuminates this link between case law and public opinion. Drawing on a diverse array of sources and methods, I employ case studies of eminent domain decisions, analysis of media reporting, an experiment to test how volunteers respond to media messages, and finally the natural experiment of the controversy over the Affordable Care Act, popularly known as Obamacare. I find that the media tends not to quote from majority opinions. However, the greater the division over a particular ruling among the justices themselves, the greater the likelihood that the media will criticize that ruling, characterize it as “activist,” and employ inflammatory rhetoric. I then demonstrate that the media’s portrayal of a decision as much as the substance of the decision itself influences citizens’ reactions to and acceptance of it. ​

The Conditional Effectiveness of Legislative Threats: How Court Curbing Alters the Behavior of (Some) Supreme Court Justices

Summary: The separation of powers literature focuses on how the preferences of one branch constrain the behavior of its counterparts. Yet in much of this work, scholars do not address how responsive behavior varies across particular members. Focusing on Court curbing legislation in Congress, we develop a model of heterogeneous responsiveness. Our theory identifies two distinct mechanisms that underpin responsiveness in judicial behavior, implying that the chief justice and the most moderate (swing) justice are more likely than their colleagues to adjust their behavior in response to external threats from Congress. We find that these two justices are significantly less likely to vote to invalidate legislation than their colleagues during periods of heightened Court curbing and provide evidence that distinct mechanisms shape their behaviors. Additionally, we offer justice-specific evidence using a pre/post promotion analysis, demonstrating that Justice Rehnquist became responsive to Court curbing only after becoming chief justice. Our model highlights the micro-level underpinnings of judicial responsiveness to inter-institutional politics and, most broadly, speaks to the need for separation of powers models to differentiate the preferences of individual political actors when seeking to understanding inter-institutional responsiveness.

Journal of Law and Courts, with Justin Wedeking

Summary: How do political actors use rhetoric after an initial policy battle? We explore factors that lead Supreme Court justices to integrate disagreeable rhetoric into opinions.  Although disagreeable language has negative consequences, we posit that justices will pay this cost for issues with high personal significance.  At the same time, we argue that integrating disagreeable rhetoric has a deleterious effect on the institution by reducing majority coalition size.  Examining opinions from 1946-2011 using text-based measures of disagreeable rhetoric, we model the language of opinion writing as well as explore the consequences for coalition size.  Our findings suggest serious implications for democratic institutions and political rhetoric.

Summary: We offer a novel consideration of how judicial behavior influences Court coverage, examining when the media use negative language to cover the Supreme Court, and the consequences of this portrayal.  We use regression analysis to examine over 1,000 news articles from 29 diverse outlets covering rulings from the 2014 term, using text-based measures of the Court and media’s negative coverage. We find that the Court sends an important signal of conflict when using negative language in its decisions, leading to increases in negativity in subsequent coverage.  We also show that this effect is conditional upon both the degree of consensus and ideological signals the Court sends when it rules. The media’s treatment of the Supreme Court is in many ways a product of the conflict and ideological positioning that can be observed from the Court’s rulings. It suggests that court signals can attenuate media slant.

Summary: This paper introduces a new perspective into the literature on judicial legitimacy by examining the incentives for courts to cater to a popular majority and offering a novel model of legitimacy that has consequences for judicial responsiveness. The account integrates into the literature classic research on how strategic social groups shape public opinion.  I theorize that citizens use their perceptions of the judiciary’s support for various social groups as a means to assess the institution overall.  From this insight, I derive specific expectations about the conditions under which the Supreme Court’s protection of minority groups like gays and immigrants can damage its legitimacy.  Using national survey data, I demonstrate that dislike for the beneficiaries of recent Court rulings systematically diminishes the institution’s legitimacy.  The influence of these group-based considerations shapes individual-level attitude change and can be observed at various points in time.

​Summary: We propose a multilevel account of legislative Court curbing in order to assess existing explanations as to why such proposals come about. We argue that although Court curbing is commonly seen as the result of institutional conflict between Congress and the Supreme Court, it is best understood as a product of three interrelated factors: the individual motivations on the part of lawmakers, the partisan context in which they operate, and institutional disagreements between Court and legislature. We find strong evidence that the preferences of individual lawmakers and the dominant legislative coalitions in Congress drive Court curbing.

Disagreeable Rhetoric and the Prospect of Public Opposition: Opinion Moderation on the U.S. Supreme Court
Political Research Quarterly, with Justin Wedeking
Summary:​ Elite rhetoric is an important aspect of democracy, and understanding why elites alter their rhetorical tone is vital to understanding the nature of public-elite interaction.  In this paper we identify the conditions under which insulated elites respond to public opinion by changing the amount of disagreeable rhetoric they emphasize.  We examine Supreme Court opinions and theorize that the majority limits the use of disagreeable rhetoric - language with harsh, unpleasant, or negative connotations - in salient cases with the intention of dulling public opposition to rulings.  We test our expectations on two levels, the first using a broad measure of public mood on a large sample of cases, and the second using a small sample with issue-specific public opinion measures.  We find that as public opinion diverges from the Court, the majority tones down its disagreeable rhetoric, but only in salient cases.​​

Blurring Institutional Boundaries: Judges' Perceptions of Threats to Judicial Independence
Journal of Law and Courts, with Alyx Mark
Summary:​ The separation of powers literature provides mixed evidence about the likelihood that the federal courts respond to Congressional threats.  Furthermore, little work has sought to adjudicate between the various threats Congress employs to ensure a compliant judiciary and the expected responses from the courts.  In this paper, we take advantage of an underutilized source of data.   We conduct original interviews with over two dozen sitting federal judges in order to distill how judicial actors interpret threats from Congress.  We demonstrate that judges are less concerned with what they perceive as policy-based threats from Congress, and we posit that this is the case because they tend to understand these as a part of a legitimate system of checks and balances. Instead, judges interpret institutional threats, or attempts to curtail the institutional independence of the judiciary, as the most concerning tool wielded by Congress, as well as the least legitimate.  Further, since most studies focus on the Supreme Court, we show that scholarship tends to ignore that all levels of the federal judiciary are attuned to the actions of Congress as a result of shared concerns about institutional maintenance. ​

​The Political Consequences of Supreme Court Consensus: Media Coverage, Public Opinion, and Unanimity as a Public-Facing Strategy
Washington University Journal of Law & Policy
​Summary: I conceive of consensus as a signal that has consequences for how the media and the public respond to rulings.  I argue that high levels of support for rulings decided by large majority coalitions arise from the more favorable treatment the press gives these decisions.  Because most citizens do not read judicial opinions and only sporadically pay attention to the Court, they are unlikely to have noticed the recent push for consensus.  Yet consensus allows the judiciary to effectively legitimate decisions by increasing favorable media coverage of them. This is important because most citizens learn about Court decisions through the press. I theorize that the press uses voting signals from the Court when shaping coverage of rulings. The press is more likely to frame non-unanimous decisions in unfavorable terms than otherwise similar unanimous ones. This difference in coverage in turn informs public opinion about high profile rulings.  The Court can foster support for its rulings by signaling its consensus to the press, which then offers favorable coverage that can increase popular approval of the Court’s actions.

Hitting the 'Bullseye' in Supreme Court Coverage: News Quality in the Court’s 2014 Term
​Elon Law Review, with Justin Wedeking and Alexander Denison
​Summary:​ We seek to understand the central components of coverage quality when it comes to the media’s reporting on the Supreme Court and specifically as it relates to the idea of citizen competence.We theorize that the quality of coverage is shaped by the relationship between the content of news reports and the Court’s opinion in a given case.  We argue that quality coverage should convey, with some degree of accuracy, the substance of Court rulings to the public. We specifically focus on both the complexity and negativity of news coverage relative to the opinions they discuss.  Our conceptualization implies that as coverage deviates markedly from written opinions on either of these dimensions, it falls short of the quality that is necessary to adequately inform citizens about what the Court has ruled.

​Journal of Law and Courts, with Forrest Maltzman, Alyx Mark, and Charles Shipan

Summary:​ Legislative enactment is only one step in the life of a law. How a law shapes public life after enactment is frequently the result of whether the judiciary interprets the provisions contained in a law and how courts reconcile provisions within and across laws. Although it is well understood that the judiciary may be crucial in determining the effect that legislation has on public life, the factors that determine whether the judiciary ends up playing such a role are not well understood. We investigate why the courts, through statutory interpretation, address some major laws but not others and why some laws are addressed soon after enactment, while others are on the books for years before they reach the judicial branch. By investigating these factors, we develop a greater understanding of how the crafting of a law shapes the judiciary’s role in interpreting it. Our evidence shows that conditions at the time of enactment, plus features of the law, play a major role in determining whether, and when, a law reaches the courts. More specifically, both divided government and disagreement between the two chambers increase the likelihood that the courts will address significant laws. We also analyze the effects of severability clauses and find that their inclusion has no effect on this likelihood. ​​​