The Value of Drafting Youth 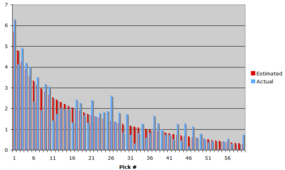 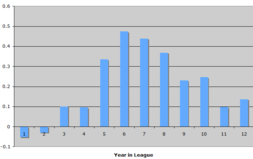 Inefficiencies in the NBA Draft

In my spare time, I enjoy combining my interests in sports with my analytic skills to study, for instance, decision making in the National Basketball Association.  An example project, exploring the biases that may hamper teams' ability to make the optimal draft selections, is discussed below.

Do teams display biases when drafting?  How can a successful organization exploit these biases to make the most effective draft decisions?

In a perfect world, the only predictor of success in the NBA would be a player's draft position.

The effectiveness, measured by Win Shares, of all players drafted into the NBA since 2000 (over 700 players total)

NBA teams display a systematic bias by overvaluing certain player attributes that do not correlate to success. Teams are consistently drafting certain types of players higher than their eventual performance would dictate.